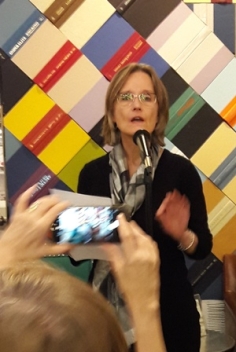 In case you couldn’t attend the Speculative Literature Foundation’s Deep Dish reading October 3 at Volumes Bookcafe in Chicago, here’s the essay I read. It appeared in a longer form at From Earth to the Stars, the blog of Asimov’s Science Fiction Magazine.

Tonight I want to talk about a big difference between science fiction and literary fiction. The difference starts with the idea that we all need to achieve self-realization. We’ve been told this by Sigmund Freud and Carl Jung, among others, because if we understand ourselves deeply, we’ll awaken our highest potential and find inner peace.

On the other hand, Martians could suddenly land and blast all of humanity into ashes. Knowing our true selves won’t save us from that.

This way of thinking about things — that external events matter more than individual self-realization — might account for the difficulty some people have with science fiction. Its stories tell an uncomfortable truth, according to Barry N. Malzberg, an author known for his dark humor.

In 1980, Malzberg tried to define science fiction. He said it “holds that the encroachment of technological change will make the future different and that it will feel different to those within it.… Lasting, significant change … is uncontrollable and coming in uncontrollably. Regardless of what we think or how we feel, we have lost control of our lives.” This is “inimical to the middle class (which has been taught that increased self-realization is increased control). It will be these changes — those imposed extrinsically and by force — which really matter.”

He wrote this in 1980. How much has changed since then, and how much control have we lost?

Cyberpunk appeared in the 1980s, and it criticized electronic society and the way it might control us. If cyberpunk dystopias haven’t become real, these warnings weren’t in vain because the future isn’t over yet.

So far, we’ve lost anonymity, for one thing. Now anyone can be famous whether they want to be or not. You can, deservedly or by accident, get mobbed on Twitter, sometimes including credible death threats. You can’t hide, and nothing is forgotten. We can never be anonymous again.

Another thing we’re losing is truth. In the 1980s, unofficial lies had a hard time spreading. Now, the barriers to retelling lies have fallen to zero, and “truth” has become weaponized.

What can we do about the loss of anonymity or truth? Not much. Even if you don’t use the internet, the internet will use you.

Technology also effects the climate, weaponry, medicine, legal and illegal drugs — and the economy, including our ability to earn a living wage. Our world is changing, and we have problems.

Yet we keep on telling science fiction stories in the face of knowing that our lives and the lives of our characters are in many ways beyond our control. Despite that, we do something puzzling: Some of our stories don’t spiral down into despair.

I suggest that’s because deep down we understand that self-realization won’t save us, but something else might. If we understand our world and universe, we can fight despair and even dabble in optimism.

I may know my true self perfectly, but that won’t stop the Martians. If I have a phaser and set it on stun, I can hope to slow down the Martians long enough for peace talks.

Now, of course, you should try to know yourself. It will bring you benefits like increased self-control, which we all need. But that wisdom alone won’t save us from external out-of-control change. Our understanding of science and technology might. We can imagine how to respond effectively. That kind of knowledge is power, and it’s what fuels our genre.